CMU Drama Win The Day With ‘Tiger At The Gates’ 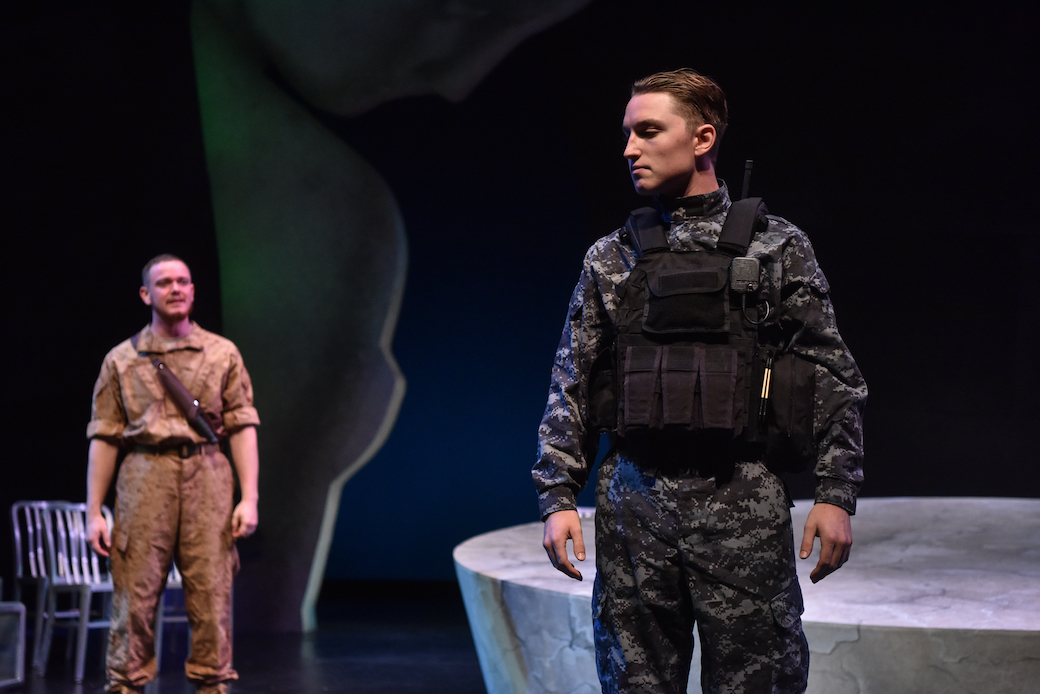 You don’t really run across French playwright Jean Giraudoux anymore. He was less prolific and his output less glamorous than his sorta/kinda contemporary Jean Anouilh. But in the early part of the 20th century, especially the period between World Wars I & II, Giraudoux was the name of the playwriting game in France.

Carnegie Mellon University presents his anti-war drama Tiger at the Gates and not only is this the first time I’ve ever seen this play (written in 1935 and adapted/translated by Christopher Fry in 1955) but I do believe this is the first Giraudoux play I’ve seen in my several decades at this desk. And if the rest of his work is even remotely fascinating as this, I demand more Giraudoux!

The original French title was La guerre de Troi n’aura pas lieu which translates as The Trojan War Will Not Take Place and it’s Giraudoux’s acid-etched explanation of how myopic, narcissistic and venal nations deliberately drive themselves to war.

It’s the day before the first day of the Trojan War. If you don’t remember that bit of Greek mythology as told by Homer in his newsy Iliad here’s the 411. Helen of Troy (although, fun fact, she wasn’t actually from Troy) is considered to be the most beautiful woman in the world and married to the Spartan king Menelaus. But one day some guy from Troy, a prince named Paris, abducts her and brings her back to Troy. This pisses off most of the Hellenic world and they all set sail, led by Ulysses (aka Odysseus), with plans to destroy Troy and bring Helen back home.

Giraudoux opens his play when Ulysses and company have turned up in the harbor to negotiate either Helen’s return or an official declaration of war. The Trojan side is led by Hector, Paris’ older brother, and a soldier just back from some other war. Hector would like nothing better than to see Helen back in Sparta because he is thoroughly sick of war and his wife Andromache is pregnant and they want their child raised in a war-free world. Hector also wants to get rid of Helen because he, like most of the Trojan court, is heartedly sick of her and her high-maintenance, drama-making ways. As it turns out Ulysses is looking to make the Helen-Return-Deal and avoid war himself. But Tiger at the Gates is about how diplomats, artists, politicians, and people with hidden agendas are leading their country into a war which will, ultimately, obliterate them.

Giraudoux’s writing – and Fry’s translation and adaptation of it – is quiet, methodical and forward-moving with relentless propulsion that, at times, is almost unbearably intense. Everyone believes the war really isn’t necessary but because of self-interest can’t stop themselves from making it happen.

And it’s especially compelling to realize that Giraudoux wrote this following the disaster of the Great War and as Europe was gearing up for another one.

It’s a huge student cast all working together beautifully under the purposeful, precise and specific direction of Gary Logan. I want to make special mention of Patrick V. Davis in a commanding performance as Hector, Arthur Langlie’s insouciant turn as Paris and Allison Ferebee’s mysterious Cassandra. Amanda Ripley is a forceful Andromache and Ava Yaghmaie’s smoldering Helen could probably set Troy on fire.

Just as remarkable is the stunning technical/craft side of the production. Set designer Vivienne Liu creates fundamental, powerfully bold visual elements on stage which are brought to life by John A. Mitchell’s gorgeous lighting design. Jessica Cronin’s costumes are as sumptuous as they are defining and William Lowe’s score is mesmerizing. Sound and Media Design by Travis Wright and SooA Kim respectively finishes off this physical production with style and skill.