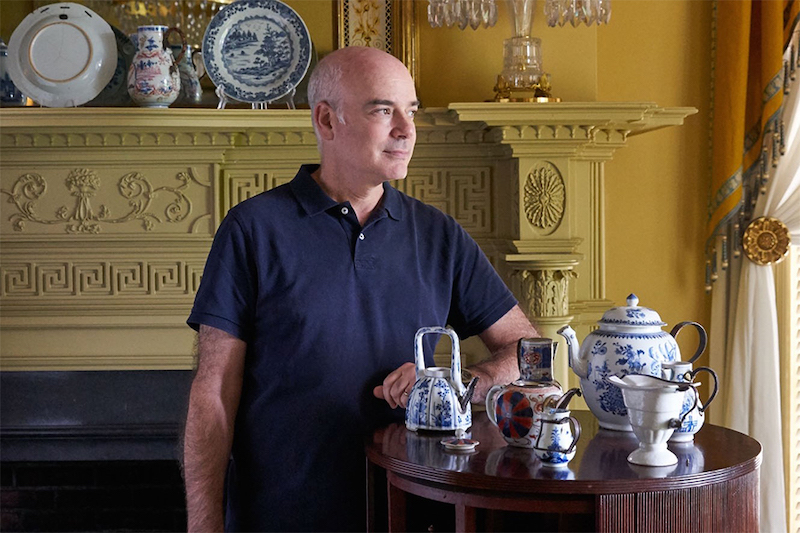 From the small screen to the Silver screen, alumnus Andrew Baseman sets the scene in Hollywood

From the stunning homes and weddings of Singapore’s elite in “Crazy Rich Asians” to the everyday existence of Russian spies in 1980s Washington, D.C., in “The Americans” to the fantasy-tinged, superhero world of “Gotham,” his Carnegie Mellon University training has been with him for every fabric, ceramic and furniture selection along the way.

“One thing I learned from Carnegie Mellon, you need to be a jack-of-all-trades and learn all periods. You’re doing Shakespeare. You’re doing contemporary. You’re doing futuristic,” says Baseman. “You have to be able to design sets that are appropriate for each scenario.”

This expansive mentality stretches far beyond his day job. Baseman is the curator of arguably the world’s largest collection of antiques with inventive repairs, known as make-dos, which he discusses in his blog “Past Imperfect: The Art of Inventive Repair.” He is also the author of “The Scarf,” detailing the art behind many wearable designs and inspired by the first scarf he bought as a first-year student at CMU, as well as the owner of an interior design company.

His attention to detail while on a project like this ensures accurate representation of the many diverse lives featured in the film.

“We’re doing a lot of intensive research, getting pictorial references and seeing a lot of interiors to show the differences between Dominican, Puerto Rican and Cuban homes. We want to make sure those interiors are accurate, but also since it’s a musical, it will be heightened reality. It’s not a documentary, so we have to make it lively and colorful,” he explains. “You are walking a fine line between those worlds.”

His commitment to accuracy stretches back to his days as a CMU undergraduate when he designed sets for “Loot” by Joe Orton and costumes for “Shout Across the River” by Stephen Poliakoff.

Both plays were set in contemporary, working-class England — a world alien to a college student living in western Pennsylvania who spent his high school years in a New England boarding school. In those pre-internet days, he found it difficult to research the very specific topics. Ever resourceful, he turned to English faculty or classmates for first-person specifics.

“After I graduated, I went to England and looked up Stephen Poliakoff, who is now a director and writer for many BBC productions. I showed him the pictures of the production, and he said I got it just right,” he recalls.

During his career, he’s welcomed viewers into the motion picture spaces he’s created for Liam Neeson in “Kinsey,” Mark Ruffalo in “The Normal Heart” and Julia Roberts in “Eat Pray Love” and the television homes and offices in “Spin City,” “Smash” and “Mindhunter.”

His recent Art Directors Guild Award-winning work for “Crazy Rich Asians” was a whirlwind as he traveled halfway around the globe with only five weeks to prep more than 68 scenes with a new crew, new assistants and newly established connections for props and his beloved antiques.

“Everything was foreign to me – literally and figuratively. Luckily, I inherited a crew that was fantastic and really resourceful,” he says. “We had no idea when we were making (the movie), it would become what it became, so that was exciting.”

He most assuredly never envisioned the Singapore-set film with its iconic water-filled wedding ceremony and antique-accented mansions connecting him to his college hometown.

While renting a home near The Frick Pittsburgh during the filming of “Mindhunter,” Basemen often found himself wandering the museum and its grounds. At the same time, he blogged about the ceramics and make-dos he’d incorporated into “Crazy Rich Asians” sets.

His blog post caught the eye of The Frick’s chief curator who asked him to write about the ceramic vases he had found in a Malaysia antique shop and used as focal pieces in a plant-filled conservatory in the film. “Setting the Scene: Ceramics in Crazy Rich Asians” now hangs beside two similar vases from the museum’s collection in the current Chinese Ceramics exhibit.

He also found his way back to CMU’s campus for the first time in decades and stopped by the Kresge Theatre where he had spent countless hours. Backstage, among the many oversized, painted cast lists, he found where he had left his mark in 1982.

“It was an intense program that immediately threw you into what a professional experience would be. It was a great way to learn the craft and immerse ourselves to learn what it takes to design, build and put on a show,” he reflects. “It was very poignant to go back to Kresge, and I felt really proud to be a part of it. I went backstage, and I saw my name up there. A little flaking and peeling, but it was still there.”